Daphne Vadman: How Being a Student-Athlete Prepared Her for a Rigorous Career Path

Daphne always knew her career in softball would lead to an education. During her senior year at Loyola Marymount University, she made a very difficult decision to end her college career by leaving the team. Though her transition was challenging, her experience as an accounting student in a Division I program prepared her for the rigorous and intense career path of working in public accounting, getting her CPA license, and becoming Vice President of Finance and CFO for various companies before eventually deciding to work for herself.
When did you start playing softball?
I started at 10. My father knew I was athletic, but something was off. One day as my brother was playing Tee-ball, I played around at practice. The ball was on the tee, and believing I was right-handed for 10 years, for some reason I swung left-handed and hit a line drive. My dad rolled a ball to me and asked for me to throw it back to him with my left hand. I did and so much made sense in that moment. I am left-handed! I was a natural at softball once we figured that out. At age 11 I tried out and played pitcher in little league. I had so much fun. At 13 I started playing very competitive travel ball, and my dad realized I should transition to infield or outfield. That was my life. I played softball every season; winter, spring, summer, fall. I loved it — it was very intense and taught me a lot of discipline.

My freshman year in high school, when I went to try out for JV softball, two sophomores I played travel ball with found me and escorted me to the varsity softball field. The varsity coach welcomed me to the team and I started playing my freshman year. I played basketball as a freshman in high school as well. Freshman to sophomore year I grew five inches, which was perfect for first base. I decided not to play basketball after that, which really bummed out the basketball coach since I had grown so much.  I loved playing in high school. We had so much potential but, unfortunately, would choke during playoffs.

How did you end up at Loyola Marymount University?
I didn’t grow up with a lot of money, so softball was my way to get to college. All of the hard work and dedication to softball paid off as I was recruited to play at LMU. I knew I wasn’t going to go pro, but it was my way to get an education. I wanted to be super practical about my career choice, so I chose accounting as a major and stuck with it. High school to college was a major transition. The demands of playing at the Division I level with 70+ games in the spring and being an accounting major was very challenging. I wasn’t the biggest standout on the field, but the experience taught me time management and how to be extremely disciplined.

What was your transition out of softball like?
I quit senior year halfway through the season. I was frustrated with not playing. Toward the end of freshman year, I started playing a bit. I played the most my sophomore year and it was by far my favorite year of my entire softball career. My junior year, I would only start half of the time. My senior, I only started a few games and midway through was not starting at all. I really thought it through and decided to leave the team. It was the toughest decision I had made up to that point in my life. It was the first time I had ever given up on anything. But I was very relieved afterward. Making such a decision has given me the confidence to know when it is time to move on from something that is no longer serving me. 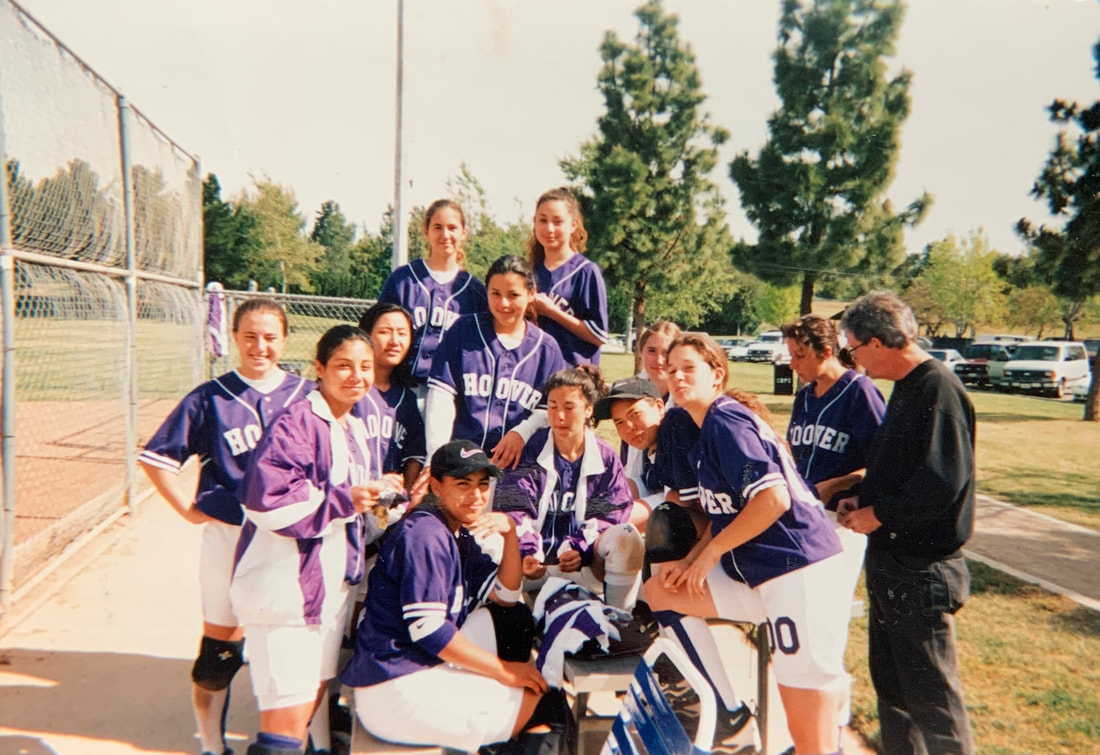 ​Was it difficult leaving your sport while still attending LMU as a student?
It took a couple weeks to transition. It was hardest to face my team members. I had a team member who was a senior who I didn’t tell and we had our whole career together and competed for the same position. She was so upset I didn’t tell her before I announced it to the team that she stopped talking to me. We had a class together and she was horrible to me. That was really hurtful. We reconciled five years later. I remember for some time after I quit, it was difficult passing by the softball fields.

Did anyone help you in your transition?
No one, other than friends. It would have been really helpful to have a program to turn to. That would have been perfect to have someone coach me through it. I was able to get through it, but it is something I have recurring dreams about. I’ve come to terms with it, but I still dream about being on the team. Working out some closure with someone would have been helpful.

Were you able to easily move into a career?
I really worked hard to make sure I had a job lined up after I graduated. I did an internship before my senior year at Moss Adams and was offered a full time position.  It was a nice relief of pressure to have a job to start after graduation.  I decided to travel quite a bit during my senior year to Western Europe and absolutely loved it.  After graduation, I pushed back my start date a few months at Moss Adams to travel more. I knew it was important to have that time before becoming an adult. A year later the firm heard I played softball and asked me to play on their co-ed company team. It was good to get back into playing.

What was it like becoming an accountant?
I worked at Moss Adams, a public accounting firm for 3.5 years. The discipline and time management skills as a college athlete helped tremendously in transitioning into the professional world. I was working 60 to 70, sometimes 80 hours per week, as well as studying for the CPA exam. I was close to burning out and realized that I wanted to go into the private sector. One of Moss Adams’ clients hired me. I was their accounting manager, and then VP of finance for three years. At 27, I took my first CFO position for an apparel company, and was there for 3.5 years. That was a very high paced environment with no mentors. I had to learn a lot on my own. I then moved onto a beauty supply distributor for two years as their CFO, followed by Wally’s Wine & Spirits. Since 2015, I have been doing accounting consultancy work as well as have been involved with a few startup projects. 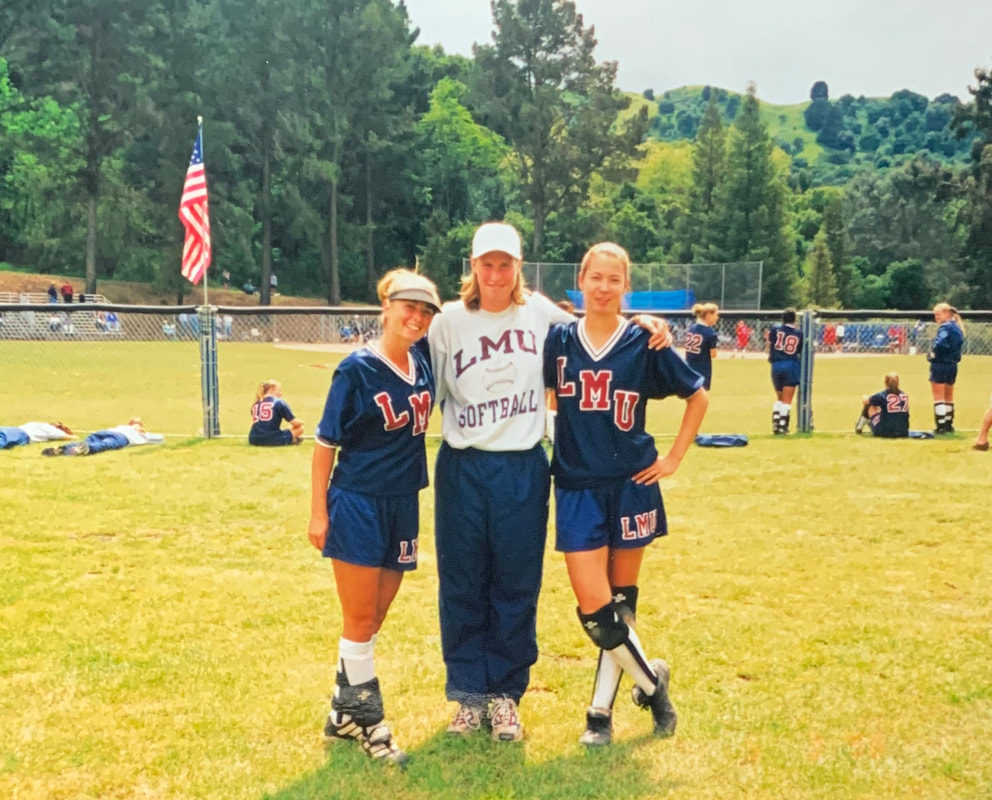 What projects have you been involved in since you decided to work for yourself?
In 2015, I began working on Fan Nation Army, which was a live video platform on Twitter and Periscope.  We would ‘go live’ during the TV timeouts of college and pro football games with a dedicated host who would interact with the viewers. It was basically a virtual place like-minded fans could go during the timeouts to rant and rave about the game. We built quite a following with 35 Twitter accounts, each representing a college or pro team, with more than 200,000 followers combined. At times, our broadcasts would reach more than 10,000 views. In 2017, my partner kept it going, and I started focusing more on growing an accounting consultancy practice. Fan Nation Army definitely had potential but we just could not get it to a point to monetize.

I consult at CFO/ Controller positions for small to medium sized companies, as well as advise startups on various business matters. I have recently partnered with the founder of Warrior Medicine, which is a life style brand consisting of products and services to help people live a more meaningful and purposeful life. We offer a 10-week program for those seeking to make very accessible shifts in their lives in order to create healthier habits and routines, better their time management, deepen their connections with people, visualize the lives they want to live and design an attainable path to achieve it. I am very excited to grow Warrior Medicine, with the founder, Grey Hunt. We both share the desire to help people and are very passionate about making a positive impact on as many lives as possible.

Did you ever get back to playing softball for fun?
A friend of mine asked me to play on their co-ed team because they were short two players, so I agreed and played first and second base at the same time. There was a very attractive guy on the other team who couldn’t hit it past me after four attempts. Remember, I was covering first and second base. After his last out, he went to coach first base and commented, “That’s how I flirt with girls. I hit the ball right at them so they can get me out.” Then he smiled innocently. I laughed internally, but I didn’t really react. Six months later we saw each other again and have been together for 11 years. Softball introduced me to the love of my life. I officially retired from co-ed softball about a year ago, but I’ve been involved with the LMU softball team the last few years. I hired two of them for Fan Nation Army projects. I try to help the players out by introducing them to other professionals, offering various project work, and/or by mentoring. It’s come full circle in terms of my involvement with the university. I love Loyola. Since I’ve been active these last couple years, I was elected to the alumni board of directors. Now I try to engage a lot of the former athletes to be involved with the school.

How did you get back involved with the team?
The head coach during my time at LMU left five or six years ago. Sami Ward was one of his all-star players shortly after I graduated. She was hired as head coach a few years ago. She reached out to the alumni and brought many of us together, which is really what got me more involved with the team. I go out to watch at least a few games every season to support the coach and team. 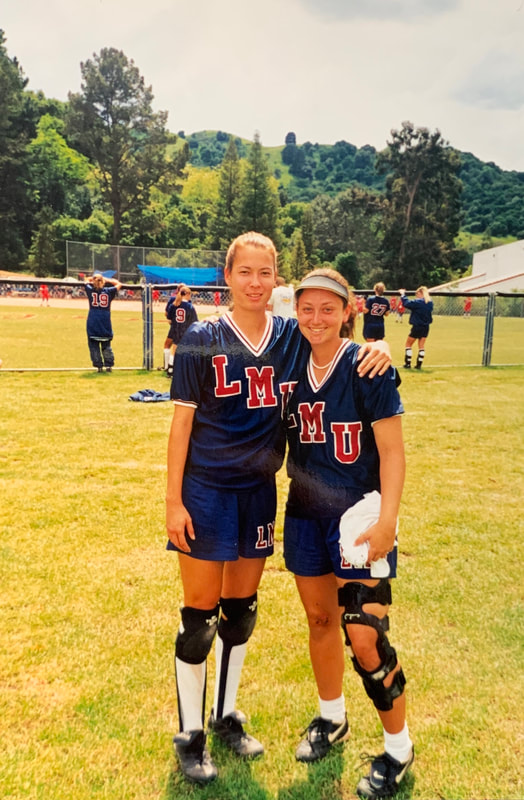 Are you still physically active?
Very. I train Brazilian jiu-jitsu, which has been my new passion. I’m also an avid snow boarder and yoga practitioner. We were prohibited to snow board as a college athlete, so I was so excited to start when my college softball career had ended. I get a season pass every year to Mammoth and have been snowboarding for 17+ years.

What advice do you have for a younger athlete who may be going through a similar transition out of sports that you had?
I highly recommend seeking out a program like Athletes Soul. I was very intrigued when I heard about it. I find it extremely important for athletes to be able to transition out. I’m really hoping universities will hire third parties to do this so that programs like this are accessible to athletes. Whether they may offer a scholarship or whatever it may be. I know a few football players who played at really reputable universities, and they struggled transitioning from being the ‘big man’ on campus to working unfulfilling jobs. They had told me they did not consider themselves to be successful. I think it’s important for athletes to understand and define what success means to them. And to remember that you weren’t ordinary then, and you aren’t now.
Support Us