When did you start playing football?
Football is pretty big in Ohio. Many people are infatuated with the sport. My older brother was seven when he started playing, and I watched him. Because of my parents’ schedule, my opportunity to play didn’t come until I got to high school. I went to Wyoming High School in Cincinnati, and after playing freshman year, I realized I was pretty good at it. I started working out harder and developed what I had. I also started working with my brother, who was an offensive lineman at the time. We got a group of others together on the field and worked out all day from sun up to sun down. From there, sophomore season came and I was playing varsity. My brother Larry was getting recruited to Ohio University, and they offered me a scholarship because they saw me on his film. Once I got that offer, I participated in the scout.com combine camp, and that got my name out there because I was up against some great competition. My name started to gain traction, and that’s when the offers came in and I had the opportunity to play anywhere.

​That’s amazing, considering you had only been playing around two years!

I was just so enamored by the game. I watched football constantly and carefully, and I took a lot of mental reps, which I believe helped me. Even though I wasn’t playing it, I was playing it in my head. I knew that when I had my chance, I would be ready and not afraid.

What made you choose Michigan?

I had actually committed to Indiana University before Michigan, as my brother was there and I wanted to play with him. However, they weren’t winning anything, so I de-committed and then committed to Cincinnati, but the coach left (currently at Notre Dame). After that I started taking visits. My mom said to give Michigan a shot, so we went up there and the rest is history. Once I went up there, everything was perfect. Ann Arbor is the ideal college town. They also offered great support for young college freshmen. At first I still wanted to play in Cincinnati at home, but Mom said it was not up for discussion — they wanted me to go there. It was a good fit, and I enjoyed it.
How was your college experience?

I did well. I was The Big 10 Conference Player of the Year, and was a leader. I played in every game, from freshman to senior year. As a team, we went to a bowl game every year. When I was a sophomore, we won the Sugar Bowl in New Orleans. We beat Ohio State in 2011. I was on the last team to beat Ohio State at home. We also went undefeated at home.

Did you know what you wanted to do after school?

I was definitely preparing to continue football. I played one season with the Tampa Bay Buccaneers, but I had to have surgery after a stress fracture in my Tibia. When I woke up from surgery, I realized I didn’t want to deal with more surgeries or injuries related to football. At the time I didn’t think I was paid enough to go through that again. I couldn’t put a price tag on my well-being and body, and was OK walking away from the game. But at the time I didn’t know how much was being done for me as an athlete.

How was your transition from football?

It was tough. It still is, even now. You give all your time and everything to four years of college ball. You get the education, but now people come out of college with degrees and aren’t guaranteed a job. I wish schools would help athletes set up life outside of football for our future, instead of focusing so much on beating Ohio State. I wish we could focus on setting up a financial cushion for ourselves coming out, and how to find balance. Some probably do now, but at the time, I wasn’t provided that education. I didn’t understand what it meant to get into debt. I wish there were more real life situations presented to us.
Did you struggle managing money during your time in the NFL?

You know, people tell you to save money. The concept didn’t make sense to me at the time. I didn’t think I needed a job right after I finished since I had money. Once it got low I needed something, and that’s where the debt started.

After your surgery, what did you do?

I had a fiancé at the time, and her dad had a job for me, so I went to work for him. At the time it didn’t seem like a lot (about $63,000 per year) coming out of the NFL. I was spoiled, self-centered, and not thinking about the future. That hindered me. I walked away from that job, then moved to LA. I didn’t know what I wanted to do then, and I still don’t.

What degree did you get at Michigan?

Why did you move to LA?

I was pursuing acting. I had the money saved up, I had a friend out there to room with, and I just went to see what would happen. That led me to a lot of different jobs, and therefore got me in touch with the real world. I learned that there are different versions of hard work and dedication, not just in the weight room and watching film. I was bussing tables, serving food, helping out on sets and figuring out how to make money. However, I still had the athlete mindset, which is pretty self-centered. I think that’s what led me to want to act. I wanted to be seen again. I didn’t feel like I was anything after football. I was there two years. I could have spent longer out there if I wasn’t so self-centered in my thinking. I feel like I was not dealing with the end of football correctly.

Did you have any other challenges in your transition?

My biggest struggle now is figuring out how to take the energy I had towards football and apply it to everything else I want to do. It’s a weird situation, because majority of people around you once you transition don’t understand the world you were in. It’s hard to describe it to them — I can’t even put it into words. That’s why I wish in college they would set you up with a counselor or something to figure out how to do some self-auditing. 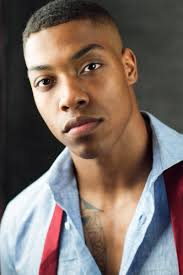 What are you doing now?

I am a graduate assistant for the football program at Bowling Green State University. It’s a great opportunity and I’m having fun with it. I want to help awaken the athletes mind at that stage. I want to feel like I’m a part of the impact.

What advice do you have for young athletes going through a similar journey?

Adjust the expectations we have for each other. Everybody can’t go to the NFL and be billionaires and have mansions. I think I’m starting to figure it out. With the pandemic and the extra time we have had, I am having a paradigm shift and I’m shifting my consciousness. I’m figuring out how to take that endurance I had for a full game of football to working at something else. I was on a run one day and I started to realize I need to have endurance in more than just training. It’s not as much about what I want to do, but in whatever I do, I must maintain my uniqueness as an individual. I want to make good money and be unique and be myself.

What’s next for you?

I’ll keep working with Bowling Green and take it one day at a time. With the pandemic going on, uncertainty is heightened. I don’t know what’s next, but I know I want to do something selfless and serve others, hopefully giving me financial freedom in the process.
Support Us