Marques Ogden: Using His Fall After the NFL to Inspire Others

Marques Ogden did everything right to have a prosperous post-sport career in finance—but that didn’t mean he didn’t have a rocky road to becoming the successful inspirational speaker and author he is today. From graduating with a degree in finance from Howard University, to participating in programs the NFL had to offer to prepare for life after sports, he had the tools to start his construction company and build it to an eight-figure business. However, one mistake cost him everything and he fell hard, eventually surviving as a night janitor. However, he realized he could use his experiences of success and hardship to help others achieve their goals.
Where are you from and how did you get into playing football?
I’m from Washington DC, and I started playing football in high school. My brother played and my dad played. I was involved at a young age because I grew up around the game. It was part of the culture of my upbringing. I was not forced, but fell in love with it. It was a great, natural fit.

How was your high school experience?
I was a good player in high school. I was in a really good conference against a lot of good players. I was good, but didn’t stand out per say, which meant I didn’t have a lot of exposure. Also, my coach made a mistake by telling college coaches I was a junior when I was a senior, which affected recruiting.

How did you end up at Howard University?
I thought my career was over after high school. I only got one scholarship offer, and that was to Howard. When I got there, I had an amazing time. I went from being a redshirt freshman to starting, but was beat really badly in a game by a defensive lineman. I was literally going to quit because I wasn’t happy with the way I was doing. My dad told me, “Marques if you make a mistake and get beat, that’s ok. But to quit because you aren’t the best or because you are struggling — you had the same thing happen to you in high school and look where you are.” I learned a lot of lessons in high school and college about hard work and discipline.

What did you study?
Business finance. I knew I wanted to get into business after the NFL.

I read that in 2005, you participated in a program through the University of Southern California on project development and construction developed specifically for NFL players hoping to diversify after their football career. Is that true, and did it help you prepare to start your own company?
It was offered to all active players, but you had to sign up for it. It gave me some preparation for sure, but it wasn’t enough to get into the big side of business like I did.

Do you feel like your college education, as well as the USC program, prepared you to handle your finances while you were in the NFL and beyond?
Absolutely. Studying finance at Howard gave me a great foundation for knowing how to handle finances in life, such as how to budget and allocate dollars. The USC program was more about development.

How was your transition from college football to the NFL?
I got drafted by the Jaguars, which was great. It was a hard transition. Just like going from high school to college, I had to adjust to the speed of the game and practices, as well as starting from the bottom and not being the “big man on campus” again. There was an adjustment to being a rookie and all the stuff you deal with that goes with that. It was difficult, but once I settled down and started to learn the system, became a veteran, and learned how to be a pro, thing got a lot better.

What were your career highlights?
Playing with my brother Jonathan on the Baltimore Ravens. He and our teammates Ray Lewis and Ed Reed just got inducted to the Hall of Fame this year, so playing with them was an amazing opportunity. In regards to playing with my brother, the great thing was having someone to speak with on a regular basis about the game at a high level. He made me a better player. Playing with him really helped me become a better individual, not just on the field, but also in life.

Another highlight was playing with the Buffalo Bills, because there were amazing guys up there. After my career they became a client of mine, which was really special. Being able to play for them, then go back as a speaker and add value to their organization was a real highlight for me.

What caused you to retire?
My father passed away, and then I sustained a back injury. I didn’t take care of my body the way I should have while I was mourning his passing. I came back after, but wasn’t in the proper shape. I ended up having a back injury, got a settlement, and that was it. That was in 2007.

Was it a difficult transition for you?
I was not prepared at all. I got hooked on painkillers, alcohol and nightlife. When I left the game they didn’t have what they offer today, like the NFL Players Association and other outlets. It was difficult. I partied really hard for six to nine months after I retired.

What was the biggest struggle that caused you to fall into that dark place?
Not having a structure and losing that team environment. Those were the biggest things that made it hard for me to get back on track with my life. When I lost the NFL, I lost practice times, meeting times, and the locker room.

How did you come out of the struggle?
I woke up one morning and said, “I have to stop doing this.” I didn’t want to tarnish my dad’s legacy by being an alcoholic who never got his life together. So I started my construction company and became a business owner, and built it from nothing to an eight-figure business by the end of 2012. I used the same skills I had developed through football to build my career as a construction owner.

Why did you choose construction?
I wanted to make big checks. I had big checks syndrome from being in the NFL. I believed I could make great money that way, and I did. Unfortunately I didn’t do a good job of keeping myself grounded. I ended up trusting a client I shouldn’t have — someone who took care of me and for whom I had done a lot of work for prior to that job. I worked for them, and though it went well for a while, we got into a situation where we needed to do more work and so we changed the order. It was denied by the developer and contractor. I thought I still had to to do it and figured I would get paid; but little did I know, we went from a bounced check to bankruptcy. That cost me everything. Do not put all your eggs in one basket. It can literally bankrupt you. It was very hard. Then I went through the same issues I had in my transition from football all over again, but this time I had no money.

What happened once you lost your company?
I moved to Raleigh. I was almost homeless. I got a job at Merrill Lynch, but was then fired because I wasn’t doing well on practice tests. I got a job at another construction company and was fired five days later because they were downsizing and they closed my division. I ended up being a custodian making $8.25 an hour on the graveyard shift, and that was my life for six months.

Wow – how did you go from custodial work to public speaking?
I had a pivotal moment when someone’s trash got on my bare skin at 4:00 in the morning, and I thought, “Enough is enough. You’ve been playing the blame game for long enough. Stop right now. If you don’t get it together, you’ll be sitting right here always blaming other people for your mistakes and failures.”

I decided to use my horror story to inspire others to achieve greatness in their lives. I talked to my inner circle. I told them what I was trying to do, and got my first corporate speaking job. That eventually led to coaching them down the line. I became a keynote speaker for big organizations.

How did the grant from the Gene Upshaw Players Assistance Trust Fund assist in turning your life around?
I received the grant when I was going through financial hardship. It was formed in 2013 and is funded by different programs, including a portion of when players get fined. It is there to help players with financial assistance who need it. After I lost my business, I filled out an application to show that I had a dire need for money. It took about four weeks for them to review and determine that I qualified. The money then went directly to my creditors. For example, they paid my landlord four months rent, paid my car payment, water bill, etc.

What’s at the core of your message to corporate organizations?
I’m hired by many different clients, so it depends on what they are looking for. But typically my talks are about leadership or growth strategies for marketing and sales. The underlying message though, from my perspective, is that when life knocks you down, get up, dust yourself off and try again.

When did you write your first book, and what is it about?
My first book was published in October of 2015, called “Sleepless Nights, The NFL: A Business and Family.” It’s about my life and what I’ve been through — everything from playing in the NFL to being a janitor.

When will your second book be released, and how is it different than your first book?
“The Success Cycle: 3 Keys for Achieving your Goals in Business and Life” was recently released on January 28, 2020. It talks about the three things you need to have in your life to achieve massive success: vision, drive and hard work. I think that it can help a lot of people, especially athletes, adjust and have ambition, drive, inspiration and motivation, as well as hard work. It’s about focusing on you, not the competition. Instead of it being about my life, it’s more of an informational book that is going to help people who are struggling to get on track.

Both of Marques’ books can be ordered on Amazon.

Would you have done anything differently?
Nope, if I didn’t go through what I did with my business, I wouldn’t be who I am today. 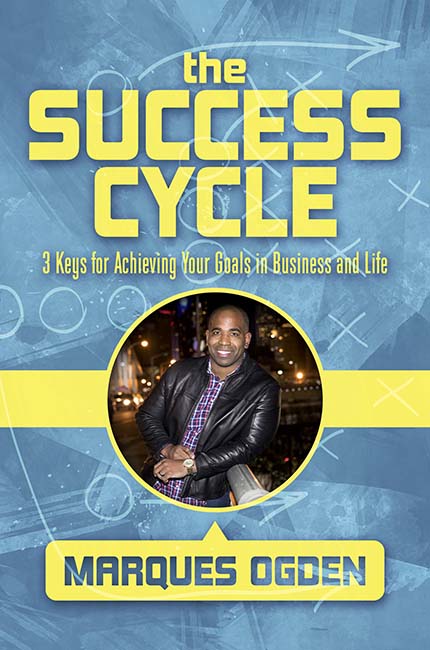