Shelley Pearson: Her Come Back After A Two-Year Retirement

Michelle Pearson is from Bermuda but grew up in Australia and the USA. She played a lot of sports growing and eventually settled at rowing in her teens. She row for Harvard for four years and then competed in the 2016 Rio Olympics. She retired after Rio and started working as a consultant for Ernst and Young. In 2018, she started rowing again with the goal of competing in Tokyo.
At what age did you start rowing?
14 years old (almost 15).

How did you get into rowing?
I started on the novice team at my high school – I was always very tall and strong for my age. I had heard that this was good for rowing so I decided to give it a go.

Did you do/play other sports growing up?
Yes, I was a swimmer, I played field hockey, I ran indoor track and did high jump. When I was younger, I tried every sport you can imagine (soccer, basketball, softball, volleyball etc.)

What was your family situation growing up? Where did you grow up?
I was born in Chicago, moved to Australia when I was 4 and Bermuda when I was 7. I was one of 2 growing up (younger brother). I went to boarding school in the US when I was 14 while my parents remained in Bermuda.

Can you provide a short summary of your athletic career?
When I first began rowing, I trained once a day after school. My second year rowing, I made the varsity boat and we won the US national championships. At that point, I started doing some occasional morning trainings in addition to the afternoons. Overall in high school, I won two national championships, came 2nd in one and competed for the US internationally twice (won gold in the 8+ after my last year in high school). I then attended Harvard and rowed in the varsity 8+ for 4 years. I stroked the varsity boat for my final 2 years. Highlights during that time include winning the Ivy League Championships in 2012, placing 3rd at the Ivy League Championships in 2013. We competed at the division 1 NCAA championships 3 of 4 years and the royal Henley regatta in 2012. In the summers I competed in the 1x at Club nationals and royal Canadian Henley. After college I trained full time in Boston and tried to determine whether I would be able to compete internationally in sculling or sweep rowing (1 versus 2 oars). I then attended Oxford where I raced in the first women’s boat race to be held on the same course and the same day as the men in 2015. In 2016 I committed to racing in the single (1x) and raced at a world cup in Poznan, Poland where I placed 9th, won the Latin American Olympic Qualification regatta (in Valpraiso, Chile), and placed 16th at the 2016 Olympic games. I attended Oxford from 2014-2016.
Do you have an extended athletic social network?
yes, my rowing network spans globally.

Did you have a retirement plan when you were competing? Had you thought about the day you wouldn’t row anymore?
I did. I knew I could row while I was in school so I tried to remain in school for as long as possible. I wanted to continue to develop skills that would help me in the workplace. That said, I was so busy with training and school that I didn’t have time to apply for jobs to have something immediately after the Olympics. Instead I began applying for jobs after the Olympics and my MBA.

How did your retirement come about? Was it abrupt or planned?
I knew that I wanted to start working after 2016 so that was always my plan.

What did you do after retirement? Did you have a job?
I spent a couple months applying for jobs and began working in January 2017.

How did you introduce yourself to people then?
I often provided a brief overview of what I had accomplished in sport and what I was looking for.

Did you still identify with your sport or your athletic social network?
I was surprised by how difficult it was to find a job in my area of choice. I realized that while my athletic accomplishments made me ‘different’ they certainly didn’t qualify as work experience. I certainly identified with other athletes who had a unique background and started the traditional working path later in life.

Did you miss your sport after retirement? If yes, what did you miss?
It took me a while to miss the sport but I always missed the aspect of being on a team and working with teammates to accomplish something together. After about 2 years, I also began to miss the pure beauty of the sport.

How did you deal with body and physical changes?
I had prior experience with medical challenges, situations where I needed to come back from being extremely out of shape. I have a history of eating related problems and I felt like rowing ‘saved me’ the first time so I was very fearful to revert back after rowing. At some point, I had to take 6 months off from rowing, 3 of which were on crutches. During that time, I was paranoid about eating too much. But this transition was easier because I was still exercising as I didn’t want to get out of shape and have to come back again. It didn’t end up being as much of an issue but it’s certainly something I’m aware of.

Did you have a surplus of energy and time? If yes, what did you do with it?
Not too much to be honest. I tried to fill my time with additional social activities and family and I threw myself into work.

How did you feel emotionally? Did you miss your teammates and athletic friends?
I felt lost for a while trying to figure out my meaning and purpose. It also took me a while to process everything that had taken place. I missed the social aspect of a team and the strive towards a common goal but I remain very close with my teammates and athletic friends. There wasn’t necessarily one big aha moment. Maybe I thought this might happen post Olympics? It ended up being a slow transition into a new normal.
Who was supporting you during your transition? Were your parents or family involved?
They were! Initially, I moved back to Bermuda while I was searching for a job. My parents were very involved, which I greatly appreciated. My friends were incredibly supportive as well.

In your professional career, how did you fit in?
It felt difficult to be on the older side of someone starting in my job and not feel like any of my experiences mattered in the working world so that made it hard to fit in initially. I learned quickly that my athletic experiences matter for teaming/communication etc. but nothing can really compare to years of work experience so ultimately I’m grateful that I wasn’t any older starting off in the working world.

Did you feel you had something to prove to others especially at work?
I wanted to prove the value of the insights I brought from my sporting career. But I didn’t necessarily feel like I needed to prove anything in relation to my athletic achievements.

What skills did you transfer from sports to life?
The primary one I would say is the ability to face setbacks and persevere. Sports taught me how to take a challenge head on and not let anything appear unachievable. Sports also taught me to accept negative feedback and work through it. I learned to work with teammates I didn’t always agree with. But most importantly, it taught me how valuable it is to have meaning, purpose and a goal to strive for.

Transitioning to life after sport is usually a long process, how long did it take for you?
It’s still happening 2 years later!

Why are you going back to rowing?
That is a question I am still working on answering. Initially it started off as a fear of regretting not going back. It has transitioned into dealing with unfinished business and a love for the sport and challenge. It has not been an easy transition back though.

You now have a professional career. How do you manage your training and professional career and trying to come back?
Precariously! I’m not training as much as in the past. Everything happens week by week as I figure things out. My company and team are very supportive, which is great, but it’s certainly not something I’ve mastered. I don’t know exactly what it will look like over the next year and a half.

What did you miss about your sport?
I missed the feeling of being on the water and the boat gliding underneath you. I missed the challenge of reaching the limits of my body. I missed racing and the thrill of finding new limits. I missed the comradery. I also missed the experiences working toward a singular goal and meeting people aligned with that goal.

What are your motivations this time around?
That is a brilliant question and one that I’ve struggled with immensely. If I’m honest I thought that I might not be able to make the come back because my initial 2016 Olympic motivations were no longer relevant. I therefore realized I needed new ones. This time around I’m motivated by the challenges and experiences and my love for racing.

Do you have a plan B if you can’t make it to the Olympics?
I don’t.

Are you family and friends supportive?
There have definitely been some questions and quizzical responses. But they are supportive if it’s what I want to do.

Is your employer supportive?
Yes, EY is very supportive of athletics. EY hired a lot of Olympians after 2016 and has a program for hiring athletes so it’s something the firm is invested in.

What will be your biggest challenge?
Finding my motivation and balancing my career while maintaining other aspects in my life that bring me happiness.

What is your best memory from your sporting career?
My best memory has to be winning the ivy league championships in 2012. That might sound crazy but that boat of girls were remarkable and we did something that day no one expected we would or could. The boat lifted out of the water and we found an incredible connection.

What makes you happy?
Feeling like I have contributed to something larger than myself and that it has meaning in some way. Working with a team to solve a problem has a tangible impact. I also love to be outside (ideally doing something athletic!) and spend time with my friends and family. 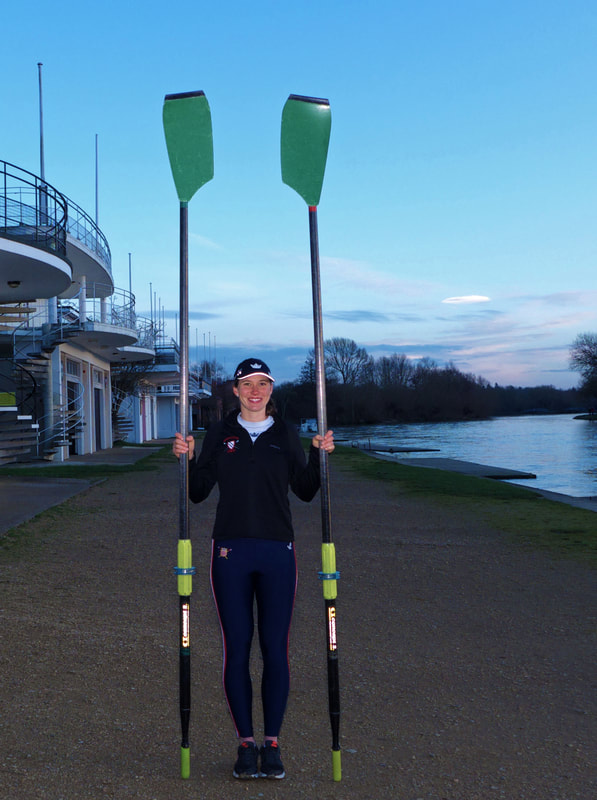